Finding a Successor for the Next Generation 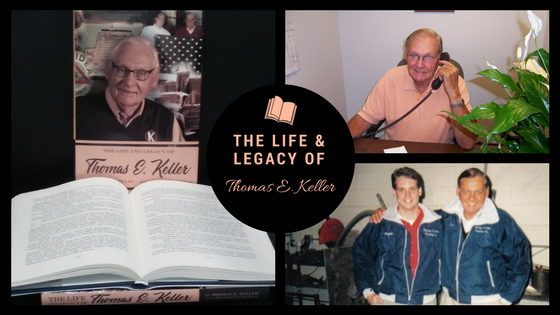 Bryan not only stepped up when I took some time off, but he also helped me decide the future of Thomas E. Keller Trucking. At 56 years old, I had to start thinking about a succession plan. And right before my eyes, I had that opportunity with Bryan. The early 1990s proved to be difficult from a personal standpoint. I was still committed to the business I had built, but Mark’s illness and Suzette’s death forced me to start thinking about my future. I was 56. What if I suddenly passed like Suzette had? Who would look after Mark? Who would run Thomas E. Keller Trucking? Luckily, when I started thinking about these questions, I already had a very promising option of a successor right at my fingertips.

During the Christmas season of 1988, Suzette had sent Bryan Keller – my nephew and Gib’s son – a present. In his thank you note, Bryan asked if he could shadow me and learn more about the business. Suzette even mentioned the possibility of Bryan, someday, being the one who could take over the business after I retired.

During that summer, Bryan dabbled in a little bit of everything – working in the office, helping Roger in the morning, and washing the trucks in the afternoon. Bryan was sharp and a hard worker. I saw potential in him. I began to think about the possibility of Bryan joining me after graduation and wondered if it would interest him. The following year, the summer of 1990, Bryan came back.

When Suzette’s accident happened at the end of that summer, Bryan was already living with us. I told him to call me before he accepted any job offers after graduation. That December, shortly before he was about to graduate, I got a call. “Tom, I have an offer on the table,” he said. I knew if I wanted Bryan to come work for me, I had to make him an attractive offer.

On his first day on the job, Dec. 26, I had him hit the ground running. He went to Saginaw. A few weeks in, I got him involved with the Optimist Club. He took everything I assigned to him seriously.

Bryan, Mark, and I got into a daily routine. Bryan would fix breakfast for us every morning. As Bryan and I worked, Mark would go to the deli and bring home dinner. Sometimes, the three of us would go out to eat. We managed to be good company toward one another. A few months went by, and Bryan was doing great. Gradually, he was taking on more and more responsibilities. He accepted it all.

In February 1991, I decided I needed to take some time off. Bryan would be in charge, and Roger was there to help, too. I talked it over with them.  I called back a few times to check in. I even decided on a rate increase for all accounts. I felt confident in leaving the office. It was really the first time I had ever spent significant time away from Thomas E. Keller Trucking since incorporating in 1978. For the first time, I had trust in someone else stepping into my shoes. Being away reinforced my instincts about Bryan. I saw how great of a job he did with the rate increases, and I knew I could start thinking about turning the company over to him someday.

At age 58, I started reading everything I could about succession planning. 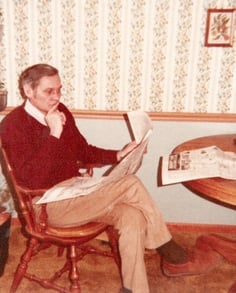 Anytime I saw a relevant Wall Street Journal article on the subject, I’d cut it out. I thought long and hard about the company’s future.

To prepare Bryan for me eventually stepping away, I tried to teach him everything I knew as we worked together in the early 1990s. I encouraged him to get involved in the community. I’ll tell you, grooming Bryan to take over the company was one of the best decisions I ever made. The staff respected him from the beginning, and Bryan showed his worth. Bryan saw business opportunities that I hadn’t seen and grew our small operation into something much larger than I could have alone. For me, this was a blessing. I knew the company I worked so hard to build would undoubtedly be in good hands and stay in the family.

With the union troubles behind us, and Bryan helping me to run the day-to-day operation, we began to think about the future. We went ahead and bought some more equipment to help us grow the business. The 1990s brought many changes, and with Bryan taking over more of the daily operations, I began to slowly step away. After some ups and downs in the business, we ended the decade much larger and more profitable.

In the mid-90s, General Motors stopped making steering knuckles. Also in the mid-90s, another two pieces of business ended. Just as I started worrying about the business and making payroll, we secured an entirely new book of business.

In the late 1990s, we started getting into the warehousing business. Bryan brought to my attention that we were delivering insulation and marbles to Perrysburg, OH, and other various warehouses. He thought if we built one, we could fill it easily. I decided it was a good idea. The next morning, I told Bryan I was ready to invest. “I’ll put in $1,000,000 for the warehouse,” I said. “You are going to have borrow the rest.”

It turned out to be one of the best decisions Bryan and I made. We built four warehouses in the next six years. Another opportunity that came about in 1999 was with Aaron, Bryan’s brother and my nephew, and a person named Dan Peck. Dan was looking to partner with us to grow his business, a Pontiac Expedited Delivery. We created Keller Expedited Delivery, paid Dan for his equipment, and we all became partners. So, for this company, it is myself, Aaron, Bryan, and Dan who owned the operation, and it’s still very successful today. After several years, I gave my ownership to Aaron and Dan.

When you build a building, it seems opportunities keep coming to you. A person approached Bryan about starting a freight brokerage company. A freight brokerage company is an operation that hires other truck lines to move the freight and makes it money on the margin. Bryan felt like this would be added diversification for our company. We rented an office in Defiance, hired eight employees, and started moving freight under the name Keller Logistics LLC. This allowed us to fill our freight basket up without adding more loads and not having to purchase more equipment. If business slows, as it did in 2008 during the recession, our blue trucks can pull that freight.  The freight brokerage is still a significant part of the business today.

There was a big 410,000-square-foot warehouse that stored Campbell’s Soup products, owned and operated by a gentleman named Tony Mark. Tony called Bryan one day. “Bryan, I’m going to have to sell my business,” he said. As the negotiations were underway, Tony even accompanied Bryan to Campbell’s Soup to discuss the sale to us. Campbell’s Soup wanted to split the transfer of product from the factory to the warehouse so they could bid it out. Tony spoke up right away to Campbell’s Soup.

“That shuttle needs to stay with the warehouse contract,” he said.  I was happy to have his support. Tony was so adamant about us taking over this purchase. We never did find out why he was so keen on selling to us. We had to spend a lot of money on that warehouse to bring it up to Keller standards. We re-lit the warehouse with motion detector lights, painted new lines, changed the layout of product, moved and added racks, and fixed outdated docks.

We were also storing product in warehouses outside of Napoleon and felt there was an opportunity to expand into Napoleon. Tony had prepared a base for another warehouse, so we finished that space, a 195,000-square-foot standalone warehouse next to the original structure.   As we began operating that warehouse, it also came with a repacking operation. This added a new skill set for us. We converted retail products like soup and juice into multi-packs to sell at club stores like Sam’s Club and Costco.

In 2002, Bryan created Keller Logistics Group to be the parent company of all of the subsidiaries, including Thomas E. Keller Trucking and Keller Warehousing and Distribution.

That year was also the year I sold almost all of my remaining business shares to Bryan and officially completed the paperwork to turn over ownership. At 69 years old, I was ready to start a new chapter. For years leading up to this, I had gradually been stepping back as Bryan assumed more responsibility. 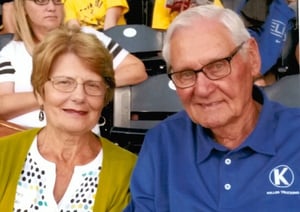 Another reason I was ready to step back: in 1994, I met Karen Parsons. Karen had lost her spouse, as well, to cancer in 1991. Our paths had crossed before, and we each knew who the other was. Our children went to school together. Our first date was the Halloween parade. Karen and I dated for four years, waiting until she retired at the age of 60 to marry. Bryan was my best man. In 1998, we married at Saint Mary’s Catholic Church, a small celebration involving close friends and family.

Karen and I became true “snowbirds,” wintering in Florida, and we love having family and friends visit us in Fort Myers.

I never had a retirement party or big moment when I officially exited the business. Although I am fully retired, Bryan keeps an office for me with a computer, Wall Street Journal, filing cabinet, and phone. When I’m in Defiance, I come into the office daily, and I have a dedicated space to read the Wall Street Journal and other trade magazines and hear the buzz of the business. I love it!