Freight Rates, Demand, and Capacity in the New Normal

While the truckload spot market is still showing record high spikes, things seem to be winding down a little, at least for right now. This brief calm could not have come at a better time for those trying to recover from the last few months' volatile price hikes. Given that this trend could lead to huge increases in next year’s contract truckload rates, shippers should start preparing their budgets now.

Even though the prices shippers are paying may still be rising, the rate of these increases is much slower in comparison to the much larger rises in spot rates from earlier this year. For example, the average national shipper retail spot market dry-van rate increased by 15.3 percent from May to June, 18.6 percent from June to July, and 10.8 percent from July to August. However, from August to September, it barely grew from $2.47 per mile to $2.59 per mile, marking a smaller (but still significant) 4.9 percent increase. 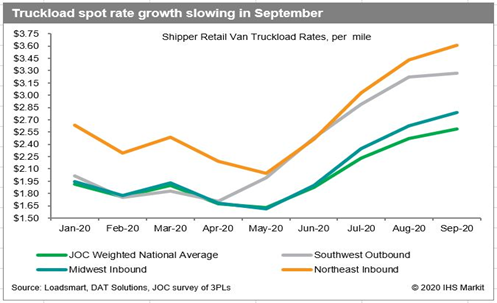 If you look at dry-van averages from specific regions in the U.S., you’ll see this same trend occurring in Southwest states like California, Arizona, and Nevada. After a 33 cent increase from July to August, the 5 cent bump to $3.27 per mile between August and September that followed was pretty tame.

To further emphasize this point, Los Angeles outbound rates grew by only 1 cent over last month, averaging at $1.57 per mile. Other regions like the Midwest and Northeast also echoed this slowing spikes pattern when you break down what shippers were previously paying to brokers and carriers month to month.

On the other hand, volumes show no signs of slowing as the economy recovers, and consumer spending increases. This relatively steady demand means that the spot market will more than likely continue to profit off of companies struggling to overcome the current capacity crunch despite a temporary break. As for contract rates, they’re expected to remain lower than the record highs of 2019 for the rest of this year but then rise again at the beginning of 2021 throughout Q1 and Q2.

Ultimately, Q3 2020 proved to be a huge improvement following a rather dicey Q2 due to factors such as less restrictive COVID-19 safety standards and the notable growth in e-commerce sales. According to FreightWaves, some carriers have stated they’re so overbooked that even if 10 to 15 percent of their loads were to disappear, they’d still be facing tight capacity constraints because of the peak season precautions shippers and retailers are taking to maintain their inventories.

Labor limitations are causing many issues for the trucking industry, however, which makes keeping up with this booming demand that much more difficult, especially for carriers. Both the introduction of the Drug & Alcohol Clearinghouse and continuing COVID-19 disruptions have only contributed to this lack of available labor that’s claiming the title of the “biggest impediment to future growth.”

To end this blog on a more positive note, though, let’s not forget the progress made over this past year. Thankfully, we’ve come a long way from the pandemic’s early stages, and that’s a feat that deserves some recognition.